So I don’t usually eat burgers when out and about… WHY? Because they are easy enough to make at home! But with the weather changing the last thing I’ve felt like when going out to eat is a 4 course meal or a roast! So I’ve taken to my own burger challenge, & on this occasion it was between 2 of the top leading most popular (at the moment) restaurants!
Sean’s Kitchen v’s Jamie’s Italian.
And boy oh boy was it a bit tough! 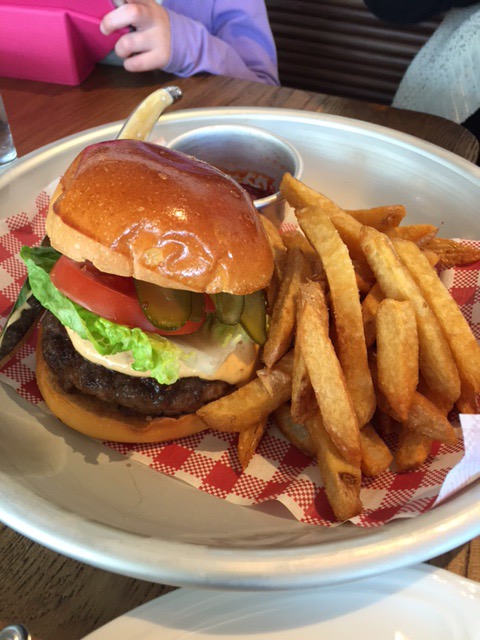 SIZE ISNT EVERYTHING!!!
Look at that teeny burger! From Sean’s kitchen. It certainly is a small burger in comparison to Jamie’s Italian (featured below) 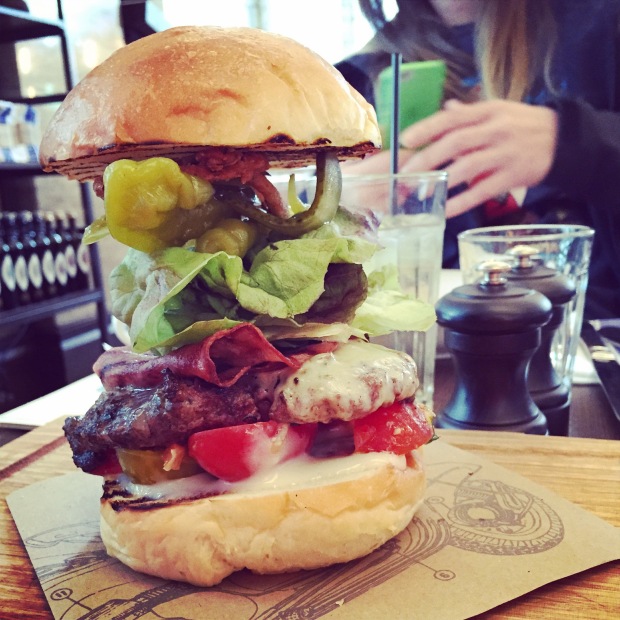 Seriously how can you compare, I hear you ask? Well I’ll just have to share with you my tastebuds and what they both tasted like!

Once arriving at Jamie’s Italian I knew exactly what I was ordering. I’d seen it, read about it on another blog and how good it was and thought “gimme gimme gimme” and when it arrived, as you can see from the picture I was amazed at how incredibly high it stood! I stared with amazement and was lickin my lips together in anticipation all ready to cut it open and see the inside. To do this though I had to squash it. Which made the burger look like a typical every day burger wrapped in paper that you’d get in a drive through window of your car. So I was then very optimistic and thought DARN it, if I wanted a double “whopper” I would have spent a lot less by doing a drive through at a fast food joint
hahaha!!

However the meat was tasty, it was cooked well & had lots of toppings which gave it great flavour. It was pretty disappointing there wasn’t really the crispy onion rings inside it, that it stated it would have on it -written in the menu. There was 2 very extremely thin onions slices or should I say slithers with a batter of some sort on the outside, but it was so far from crispy! Utterly disappointing. There was not a whole lot of the salsa either, so it was a burger that was lacking in the all over judging for flavour. It was also served with no side of chips/fries. At $20 I was pretty shocked! Not even a side of aioli or extra salsa.
(Chips in picture below were purchased as a side) but here is the inside of the burger.

When it came to the Sean’s Kitchen Burger, it came with a side of duck fat fries! Yay – a side, no extra cost! Although the burger looked a LOT smaller than the Jamie’s Italian Burger. This burger didn’t have any where near as much as the Jamie’s burger… However the taste was hands down faultless! That sauce! Oh my gawd! I was still day dreaming about it for the next 3 days! I did think the meat it’s self for a burger was a little under done, to how I would like to eat my meat on a burger. Although it was all so delicious I couldn’t fault the meat for the sake of the flavour!
Picture below of the inside of Sean’s burger 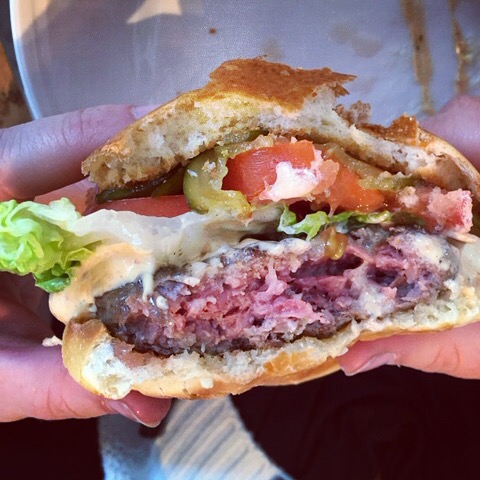 All things considered I can say with out a doubt I would go back to Sean’s Kitchen for a burger everyday given the taste!
Well done!!!!